If you have several days at your disposal, we can propose different excursions that will allow you to fully enjoy the Campo Tencia region, experiencing emotions that will make it wonderful. This is a quite demanding trip (T3 level) that fully rewards with the view on the Campo Tencia Group: rocks, crests and pastures that won’t leave you indifferent.

From the hut going up to the Morghirolo lake (2264 m) it will take about 40 minutes. Following the new path, at the height of 2400 m, you will reach Cassine Lei di Cima, and keeping the right towards the east, you will reach a detrital area and eventually a grassy slope. You can now reach the east crest, which is located at about 50 meters from the summit. In order to ascent the main summit, you can continue on the crest and then reach the depression (level II°).

Descending, once you have reached the Red Crest’s pass (2620 m), you can aim towards a spot called Piode. Afterwards, you will pass on various grassy slopes until reaching Cassine Lei di Cima (2400 m). You have now the possibility to proceed until Leit hut in about one hour and a half, or to go back to the 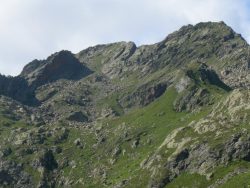 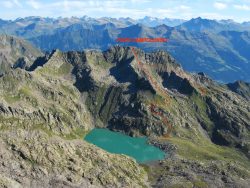 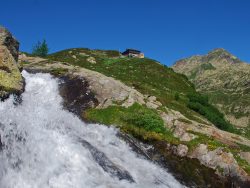 Duration: more or less 2 hours and a half 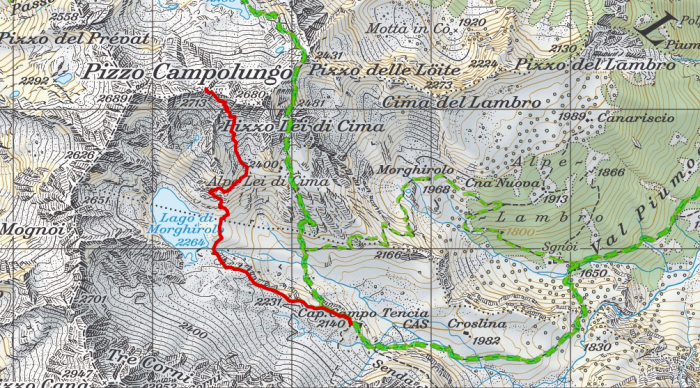 The circuit connects the Campo Tencia hut to the Leit hut. It takes more or less 6 hours from hut to hut, and it allows you to discover the interesting Campolungo region, with the possibility to sleep in one of the two huts. The itinerary can be covered in both ways.

It is a demanding path on rocky land and sometimes arduous, therefore it’s not recommended in case of bad weather. The route includes some difficult angles where great experience is necessary.

The northern side of Mognoi Pass and the western side of the Prèvat Pike Pass are equipped with metallic ropes.

From Campo Tencia hut, you must follow the path to the Morghirolo lake. Once you passed it, the blue signage will conduct you to the Mognoi Pass (2613m). Descending over the Zaria village (1930m), then going back up to the Prévat Pike Pass, passing through the fascinating Canton del Prévat little lakes, you will finally reach the Leit hut. 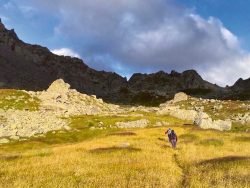 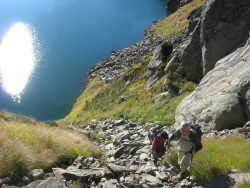 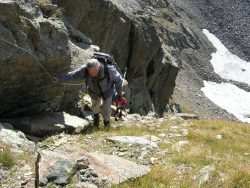 Duration: 6 hours from hut to hut or 7/8 hours for the complete tour

Best period: from July to September

Equipment: “via ferrata” equipment is recommended. 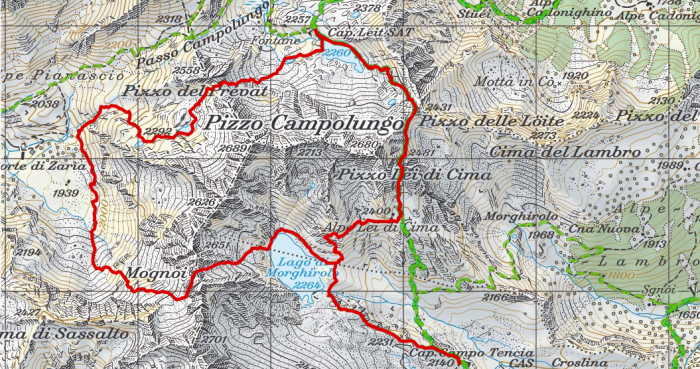 Campo Tencia peak is an incredible stone and ice pyramid that, from its height, offers a 360° view.

Croslina peak raises over Campo Tencia hut like a titan, while from east it appears like an elegant pyramid.

From Campo Tencia hut you head towards south following the white and blue signage, until you reach a waterfall. To the left, you’ll find a large path who leads to the ledge that crosses the whole wall to a well signed and exposed path, that goes up to the south-east reaching an easy crest.

Following the white and blue signage in direction south west, going down the glacier, you will find the Croslina Pass (2687 m) and finally the cross that is located on the summit.

There is the possibility of traversing towards the Soveltra hut in the Maggia valley, descending from the summit direction southeast and following the white and blue signage.

How to get to the Croslina peak: from the depression, you will have to follow the blue points signage to the north-west, until reaching the ledge located on the right side of the obvious detrital slope. It is an exposed climb with rocky pitches of level II°.

For both routes, the descent is possible by the same itinerary. 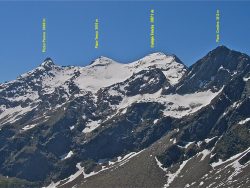 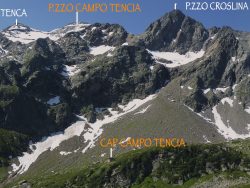 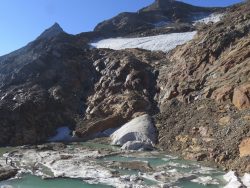 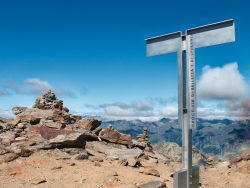 Duration: 3 hours for one summit or 4 hours for both

The Forno peak is a majestic pyramid at the ridge’s far end and its summit, which overlooks the medium Leventina valley, offers a 360° view.

From Campo Tencia hut you slightly descend toward east/south-east on the Senda del Ghiacciaio Senda following the white and blue signage. This path will lead you to easily cross the steep north-east side of the Campo Tencia peak. Continuing broadly and almost horizontally, along the grassy and detrital slope located over the Böc di Comasné hollow, you will reach the other side of the northern spur of Poncione del Laghetto (2311 m).

Heading towards south east, through a detrital slope, you will reach the Ghiacciaione pass (2716 m). From there, bypassing to the right the crest’s first section, you will enter the finale detrital slope that leads to the summit. 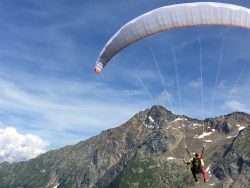 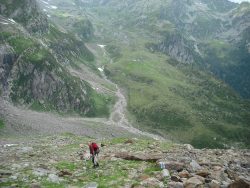 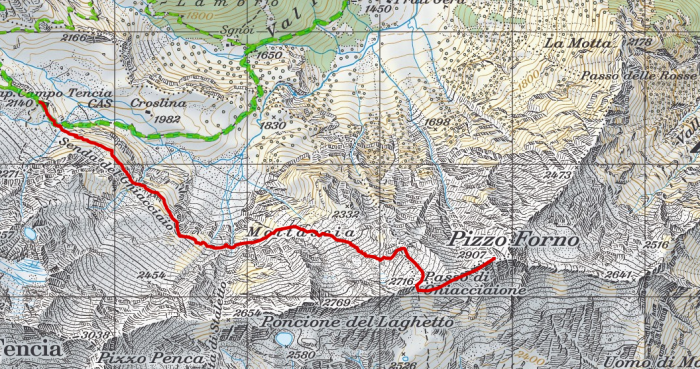 Last but not least, we recommend this trip: Morghirolo lake, back to Dalpe through the educational path and the visit to the Vecchi Alpeggi di Lei di Cima and the Morghirolo alp. If you’re lucky, you could meet steinbocks, marmots, chamoises, eagles and a rich alpine flora.

The Morghirolo lake is also called Croslina (crozlina) lake, Tencia lake or Cima lake. It is located on an icy origin rocky hollow, at the southern foot of Campolungo and it is blocked downstream from detrital masses which have detached from the Campo Tencia mountain range. These masses lean against some solid big rocks and the outflow takes place on the surface.

From the hut, you go up towards west on the new path and in 40 minutes you’ll be at the Morghirolo lake. This place is splendidly quiet. The path continues towards Cascine Lei di Cima, always following the white and blue signage, where you can appreciate the complete view on the Campo Tencia Group.

From Lei di Cima you descend on the old path and you will reach the Campo Tencia hut. Before crossing the Morghirolo river, a deviation on your left will advise you about the educational path. Along the path, you will encounter many educational signs that will accompany you through Morghirolo alp, Lambro alp, Geira alp until reaching Dalpe. 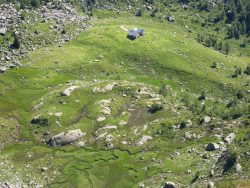 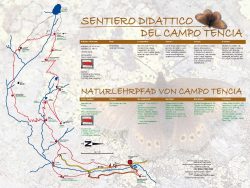 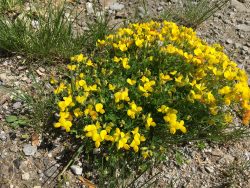 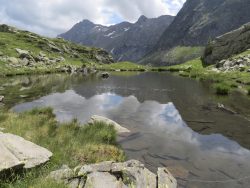 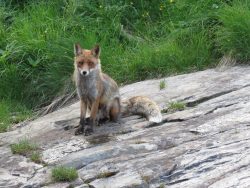 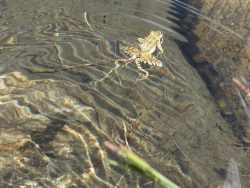 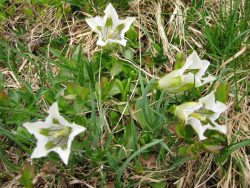 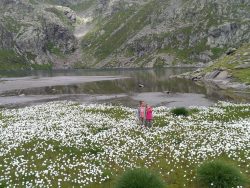 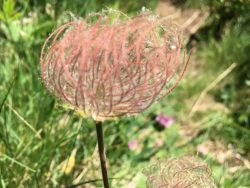 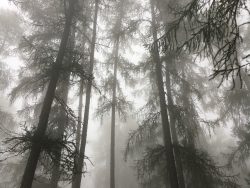 Duration: more or less 8 hours from hut to hut 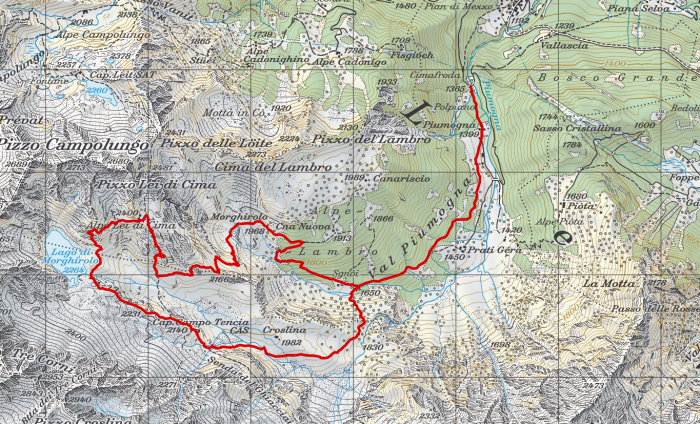